The EU H2020 project ParaFishControl has developed specific tools to help farm managers to control parasitic diseases in their farms. These tools provide information to support the management of the main disease-causing parasites affecting the farming of salmonids, turbot, carp, European sea bass and gilthead sea bream in European countries. Among these resources, four free-access guides have been edited by Prof. Ariadna Sitjà-Bobadilla , coordinator of the project and researcher at the Institute of Aquaculture Torre de la Sal (IATS-CSIC) in Spain, and Emma Bello-Gómez from AquaTT.

These guides describe in a concise way, easy to read, with colourful pictures and diagrams, how to combat the most important fish parasites affecting salmonids (guide no.1), gilthead sea bream and European sea bass (guide no. 2), common carp (guide no. 3) and turbot (guide no. 4). The guides include background on the parasites’ biology, an examination of key risks for infection and disease progression, up-to-date guidance for the identification of symptoms, as well as guidance on management and control of the parasite. The guides may serve as an easily comprehended and necessary support during the daily handling and management of these fish.

The guides have been edited by Editorial CSIC and can be downloaded freely following the provided links. 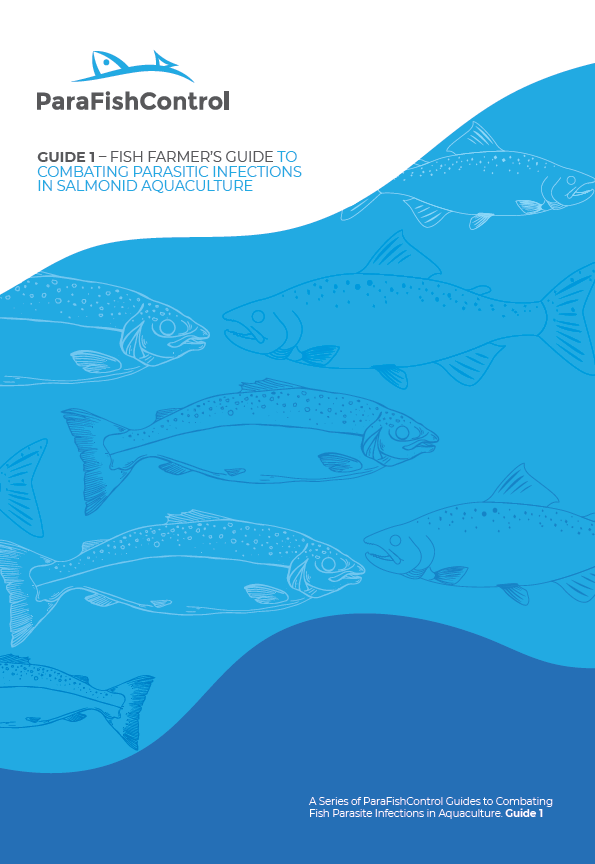 Salmonids aquaculture is nowadays extended worldwide with different farming practices. It includes more than 25 different species, but the production in European countries is headed by Atlantic salmon (Salmo salar) and rainbow trout (Oncorhynchus mykiss). In the EU, both species accounted for almost 400,000 tonnes in 2017, whereas in Norway it reached 1.3 million tonnes in 2018. Other minor species are brown trout (Salmo trutta), grayling (Thymallus thymallus), and whitefish (Coregonus spp.), which are primarily directed toward restocking programs in natural water bodies for restoration purposes. In this guide, fish farmers can find information for five parasites jeopardizing farming of salmonids in European countries: the salmon louse, Lepeophtheirus salmonis; Neoparamoeba perurans, causative agent for amoebic gill disease (AGD); Ichthyophthirius multifiliis, causative agent for fish whitespot disease (“Ich”); Saprolegnia parasitica, a fungus-like oomycete; and Tetracapsuloides bryosalmonae, causative agent of proliferative kidney disease (PKD). It includes valuable information on clinical signs, identification of the pathogen, biology of the parasite, the life cycle and recommendations for control. This manual does not provide comprehensive details, but may serve as an easily comprehended and necessary support during the daily handling and management of these fish. The guidance provided for each parasite reflects the current state of knowledge for these pathogens and has been informed, in part, by research conducted through the ParaFishControl project. This guide also provides details for expert contacts within Europe who may be consulted for further support. 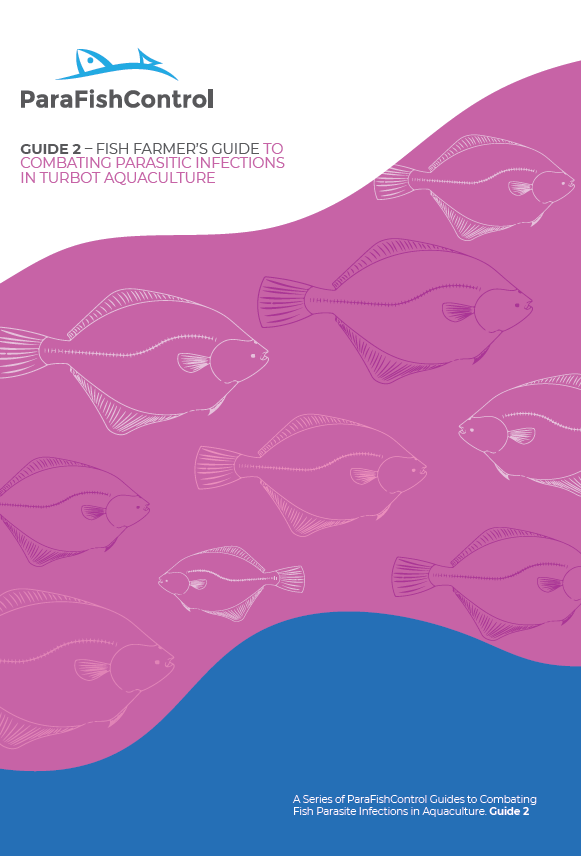 The turbot, Scophthalmus maximus, is a flatfish species belonging to the family Scophthalmidae, order Pleuronectiformes. This species is distributed throughout the Northeast Atlantic, the Baltic Sea, the Mediterranean Sea, and the Black Sea. Turbot are carnivorous fish and can reach up to 1 m in length and up to 25 kg body weight. The flesh is greatly sought-after and has a high commercial value. Turbot aquaculture began in the 1970s in Scotland and was then introduced to other European countries, Chile and China, being the later the main worldwide producer. In 2017, the total turbot production in Europe surpassed 11,000 tonnes, with Spain being the main producer with more than 8,500 tonnes. Cultured turbot larvae are fed microalgae for the first 5 days post-hatching, followed by rotifers, Artemia and conventional weaning diets. At the age of 2-3 months, juveniles are raised in a nursery until they reach about 20-30 g body weight. Fish are then transported to on-growing facilities and reared in onshore tanks, with open or recirculating seawater systems, or in submerged, flat-bottomed cages. In this guide, fish farmers can find background information on the two main parasitic diseases that affect farming of turbot in European countries causing serious mortalities, scuticociliatosis caused by the ciliate Philasterides dicentrarchi, and enteromyxosis caused by the myxozoan Enteromyxum scophthalmi. The information provided reflects the state-of-the-art knowledge for each parasite, which was in part obtained through the European project ParaFishControl. The guide includes valuable information on clinical signs, identification of the pathogens, biology and life cycle of each parasite, risk factors and recommendations for handling and control of facilities. The guide also provides contact information of professional experts that can assist farmers and aquaculture veterinarians. 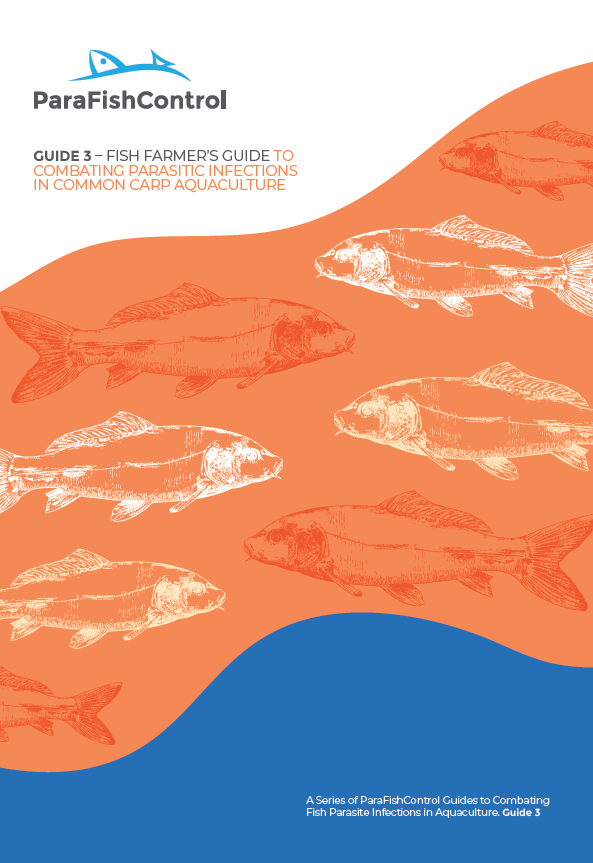 Originally native to temperate regions of Asia, common carp, Cyprinus carpio, is the most cultivated and refined carp species throughout the world. It represents the oldest domesticated species of fish for human consumption (identified in China, from the 5th century BC). Carp production is comprised of ornamental fish industry, sport fishing, and food production. Common carp is the third most widely cultivated and the most commercially important freshwater fish species in the world, with approximately 4.6 million tonnes produced annually. EU production of common carp reached 85,000 tonnes in 2016, which represents 4% of the global EU aquaculture production. The leading EU producers are Poland and the Czech Republic. Carp production in the EU is accomplished in extensive or semi-intensive pond monoculture or polyculture systems, with semi-intensive polyculture as the dominant form of management. Reproduction occurs once a year between May and June, and marketable fish are produced over one or two summer seasons resulting in a three to four-year production cycle. Production typically can reach up to 1,000 kg/ha. The features of carp aquaculture that make it a profitable industry – excessive stocking density in non-flowing, organically enriched waters with minimal nutrient food input – also represent high risk factors, promoting various pathogenic infections and enhancing disease development. Diseases are the major limiting factors for future carp aquaculture and parasitic diseases are of particular importance. In this guide, fish farmers can find important biological information on some of the main parasitic diseases of common carp in European countries: the myxozoans Sphaerospora molnari, Thelohanellus kitauei and similar species, the ciliate Ichthyophthirius multifiliis, the oomicet Saprolegnia parasitica, and zoonotic helminths. The profile of each parasite includes the clinical signs, identification of the parasite, its biology and life cycle, and recommendations for control. This guide does not provide comprehensive scientific details but can serve as a practical guide that provides support during the daily handling and management of carp, and it reflects the current state of knowledge for these pathogens and has been informed, in part, by research conducted through the ParaFishControl project. The guide also provides details for expert contacts within Europe who may be consulted for further support. 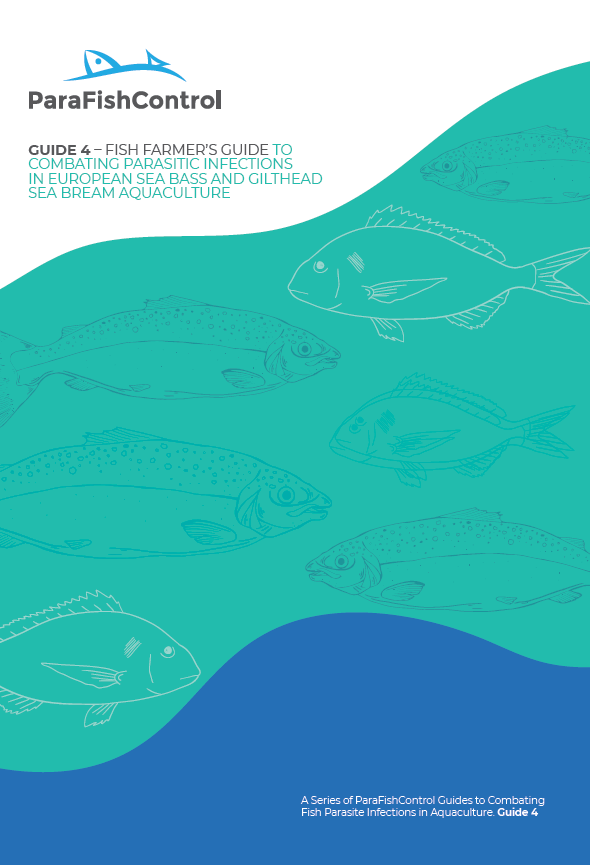 Mediterranean aquaculture production relies on different culture systems and technologies ranging from modern, industrialized breeders to extensive earthen ponds “esteros” and floating offshore cages. Two main species lead the aquaculture production, namely European sea bass (Dicentrarchus labrax) and gilthead sea bream (Sparus aurata), which are cultured in 19 Mediterranean countries. Six of them gather over 90% of the production (Turkey, Greece, Egypt, Spain, Tunisia, and Italy), which rises up to almost 350,000 tonnes. The main producers in the EU are Greece, Spain, Italy, Croatia and France. Total juvenile production (more than 1,200 million fingerlings) is concentrated in just five countries, as more than 90% of fingerlings are produced in Greece, Turkey, Spain, Italy and France. Such concentration of the aquaculture production involves an important and constant commercial and transportation flow of fingerlings from breeders to on growing facilities, with subsequent potential hazards for animal health. Thus, production encompasses the use of over 600 million doses of vaccines used for bacterial and viral disease control. Nevertheless, no vaccine exists against parasitic diseases and only few treatments are available. This guide provides basic information for fish farmers on the main parasitic diseases affecting European sea bass and gilthead sea bream aquaculture in Europe. The information on each parasite reflects the current state of knowledge, partly reached in the frame of the European project ParaFishControl. The guide includes information on five parasites: the dinoflagellate Amyloodinium ocellatum, responsible for the amyloodiniosis in both species, Enterospora nucleophila, a microsporidian causing emaciation in gilthead sea bream, Enteromyxum leei, an intestinal myxozooan that causes enteromyxosis in gilthead sea bream, Sparicotyle chrysophrii, a gill monogenean responsible for the sparicotylosis in gilthead bream, and Ceratothoa oestroides, a crustacean isopode affecting mainly European sea bass, but to less extend also gilthead sea bream. Furthermore, schematic diagrams on other ecto- and endoparasites of both species are provided. For each parasite, valuable information is provided on the clinical signs of the disease, on parasite identification, on the parasite’s biology and life cycle, risk factors and recommendations on their management and control in farming facilities. Contact information in order to reach professional field experts who can assist farmers and veterinarians of aquaculture sites, can also be found in this guide.