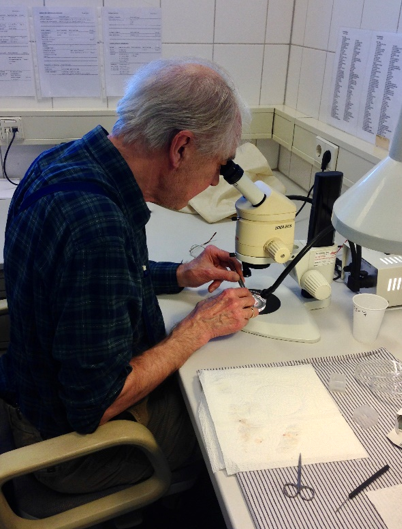 On Sunday the 15th of March 2020, Dr. Remmelt Bootsma sadly passed away at the age of 80 years, in Blaricum, the Netherlands.

Dr. Remmelt Bootsma was an important all-round fish pathologist. In 1968, he became a leading Researcher in Fish Diseases at the Dept. Pathology of the Veterinary Faculty at Utrecht University, completed his Ph.D. thesis on fish diseases in 1976, and headed the Dutch fish diagnostic disease laboratory for fish culture until 1984.
Dr. Bootsma did important discoveries in fish diseases: In 1971, he published on hydrocephalus and “red-disease” in pike fry, causing serious losses in Dutch pike culture. In 1973, a paper in Nature was published on the Isolation and identification of the causative agent of “red disease” of pike with Dr. P. de Kinkelin. Bootsma also found this bullet-shaped virus in kidney sections of Pike fry with “red-disease”. This was Pike Fry Rhabdovirus (PFR virus). Bootsma researched the PFR virus in pathogenicity trials with fertilized pike eggs, with 100% mortality in the pike fry, showing hydrocephalus (1975, 1976 thesis). This resulted in an easy and today still practiced method to prevent this virus in pike culture, by disinfecting fertilized pike eggs with iodine.
Regarding fish bacteriology, Dr. Bootsma, Prof. Fijan a co-worker discovered the etiological agent of Carp Erythrodermatitis, Aeromonas salmonicida complex (the atypical strains, 1977-1978), and published on characteristics of the columnaris disease bacterium (with Clerx, 1976). Apart from these important findings, Bootsma published on Ichthyophonus (1970), white spot of fish (1972-73), Saprolegnia in pike culture (1973), fish bacterial immunology, wrote a fish disease chapter in the Aquarium Encyclopaedia in 1978, and a review on SVC virus as the cause of Infectious Abdominal Dropsy of carp, i.e. Spring Viremia of Carp (1983). Since 1984 he was a private fish pathologist at one of the major importers of ornamental fish in the Netherlands until this spring.
I met Dr. Remmelt Bootsma in 1985, when I was allowed to build up the fish disease laboratory at the Dutch Veterinary Institute (nowadays WBVR) from scratch. He provided me with necessary biologics and samples from his former lab and supported me above all in knowledge and as a coach. Bootsma was a top analyst, and taught me to take time for necropsies of fish, and look further than to the expected. He was a very humble, modest personality, with a broad interest in the persons around him. I am extremely grateful to him, and he will always be remembered.
I wish his wife Marga, their children and family, and his colleagues’ much strength.