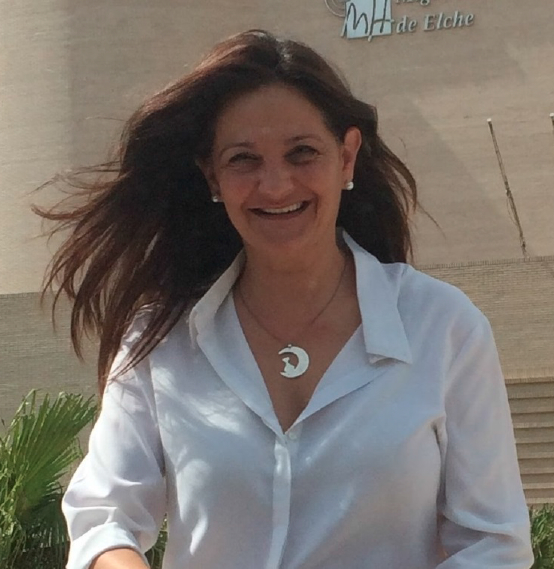 Dr Amparo Estepa Perez obtained a Master Degree in Biology at the Universidad Complutense in Madrid. She conducted her PhD work at INIA on development of recombinant vaccines against VHSV. She defended her Doctoral Thesis in 1992. Amparo Estepa contributed to the development of the High Containment Facility at Valdeolmos, Madrid (Centro de Investigación en Sanidad Animal, CISA). She worked as a postdoctoral student at the INRA research centre in Jouy-en-Josas, also at Eurogentec in Belgium and at Wageningen University. In 1997, she began working at the Universidad Miguel Hernandez, Elche and was one of the key persons in the early development of this University. Later on, she became Chairman of Biochemistry and Molecular Biology and had several responsabilities at the University’s Instituto de Biología Molecular y Celular (IBMC) until her death on October the 9th, 2015.

Her research was focused on cellular and molecular aspects of fish, mainly salmonids, immune response against viruses, specially rhabdoviruses. Among other subjects, she was interested in the development of new prototypes of viral DNA vaccines and antiviral molecules, the characterization of the role played by the host antimicrobial peptides in the protective response against virus and the study of the crosstalk between innate and adaptive immune system. She was able to transfer her studies on these subjects to the industry and she had several patents of molecules and processes with veterinary and biomedical use.

Since the very beginning of her professional live, her entushiasm and optimism was outstanding. There was no obstacle that she could not overcome. She faced all the challenges with decision and strength. She was quite audacious in her hypothesis and once she was convinced she was hands on at the bench and at the aquaria conducting the corresponding experiments. She was always volunteering to represent the research group or the Project consortium in meetings always with loyalty to her research partners and her Institution.

She knew how to win the confidence of everybody since the very first moment. As it can be deducted form her research publications she was able to coordinate and develop research with scientists from different institutions and geographical locations in Spain and in several countries such as the US, France and The Netherlands.

Her students have learned from her example to be generous, open minded and being positively ambitious, with a hard work component, keeping in mind her teaching activity that was extended to the organization of seminars and other outreach activities. Her sincerity and demand of hard working was hand by hand with lots of love and care for the many young scientists that were her masters and PhD students.

Amparo has left an unforgettable presence among all of us that had the privilege of have known her and be among her friends.